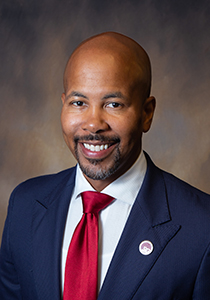 With more than 20 years of entrepreneurial experience in energy, real estate, and construction, Derron Sanders serves as the Founder/CEO of Sanders Management Group, Ltd.

Mr. and Mrs. Sanders began their real estate career in 1997 with Mr. Sanders’ initial purchase of a small two-family flat on the City of Detroit’s west side and established Sanders Group (“SG”) in 2000.

As SG’s primary visionary, Mr. Sanders oversees the internal operations of the company and is responsible for the successful implementation of all financing, construction, and marketing strategies for SG.

Additionally, Mr. Sanders currently serves on the boards of First Independence Bank, the Detroit Athletic Club, the Detroit Regional Chamber, and Grow Michigan II. Mr. Sanders also is a member of the Alma College Board of Trustees.

Mr. Sanders was born and raised in Detroit, MI. He received his B.S. in Electrical Engineering degree from Michigan State University and an MBA (Finance emphasis) from Wayne State University.

Derron Sanders loves to travel with his family, play basketball and is an avid reader. His favorite poem is, “If” by Rudyard Kipling and “No one cares what you know until they know that you care!” ― Benjamin Franklin