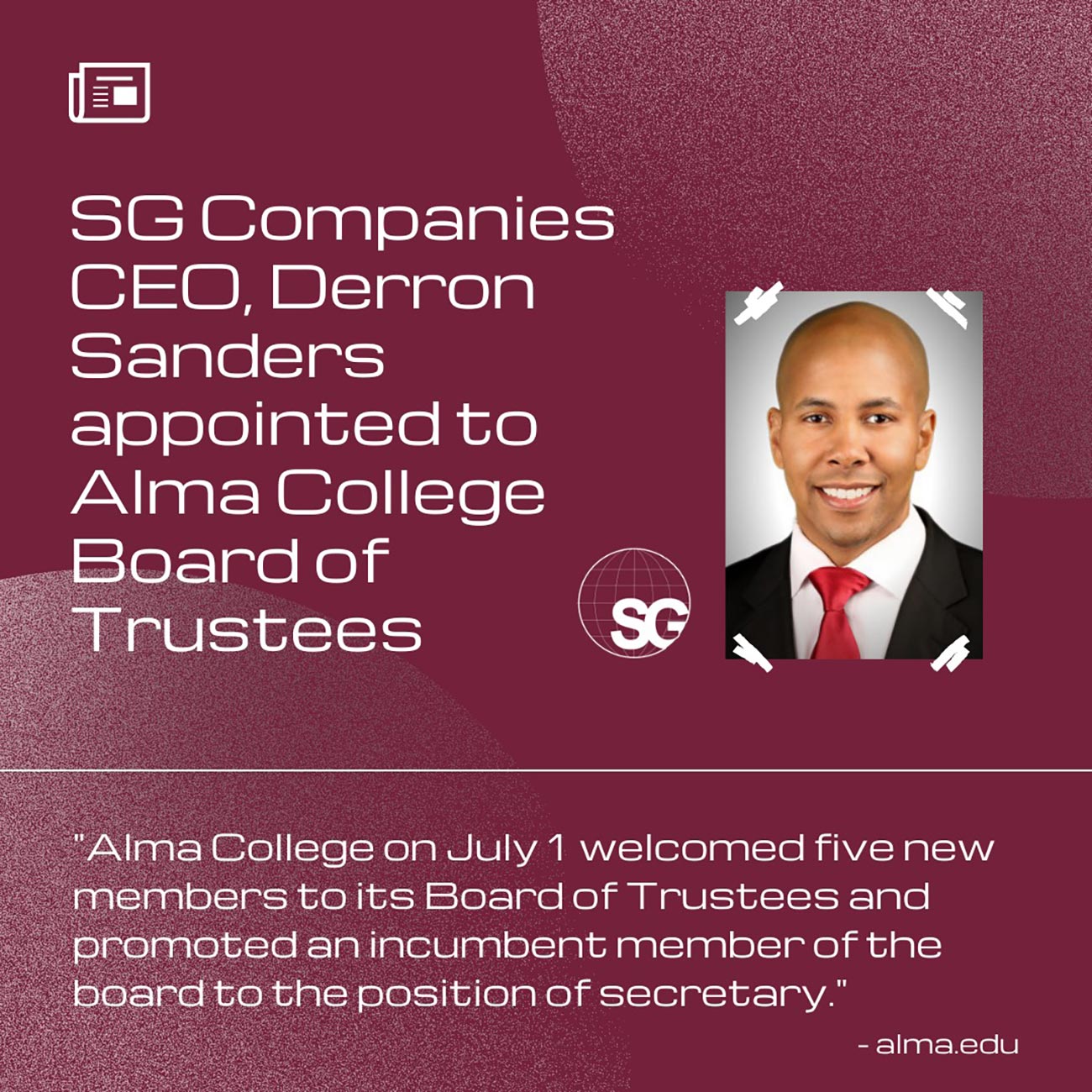 Congratulations to our CEO, Derron Sanders, on being appointed to the Alma College Board of Trustees!

ALMA — Alma College on July 1 welcomed five new members to its Board of Trustees and promoted an incumbent member of the board to the position of secretary.

Kevin Blatchford ’83 of Chicago, Ill., Charles Hardwick ’88 of Birmingham, Chris Hufnagel ’94 of Ada, Derron Sanders of Bloomfield Hills, and Jim Wheeler of Alma were appointed to the board, while Carol Burns of Sanford became secretary.

Blatchford is a partner and attorney with Sidley Austin, LLP in their Chicago office. He joined the firm in 1986 and became a partner in 1994. His principal areas of practice are corporate finance, mergers and acquisitions, and corporate reorganizations/bankruptcy.

Blatchford is a member of the Alma Ambassador Program, the college’s signature volunteer engagement program.

Charles Hardwick ’88Hardwick graduated with a Bachelor of Arts degree in international business administration and Spanish in 1988. While at Alma, he minored in French and was a member of Sigma Alpha Epsilon. He was on the homecoming court, was a choir member and participated in the Alma Leadership Alliance. He was also a Barlow Trophy winner, the college’s most prestigious award for a graduating senior.

Hardwick went on to earn a Master of Business Administration degree in organizational behavior from Northwestern University’s Kellogg School of Management in 1993 and a Master of Divinity degree from Princeton Theological Seminary in 1999. He earned his Master of Theology degree in preaching from the Candler School of Theology at Emory University and his doctorate degree in homiletics from Princeton Theological Seminary in 2007.

Hardwick currently serves as transitional synod executive for the Synod of the Covenant in Bloomfield Hills. Prior to this experience, he served as the director of theology, worship and education for the Presbyterian Mission Agency of the Presbyterian Church (USA) for six years. Hardwick also serves as an Alma Ambassador.

Hufnagel earned a Bachelor of Arts in political science and history from Alma College in 1994. While at Alma, he participated in men’s basketball, was a member of Sigma Chi and was in Model United Nations.

Hufnagel then entered the world of business, where he worked in various leadership positions at Abercrombie & Fitch, the Gap and Under Armour, before joining the footwear manufacturer Wolverine Worldwide in 2013. Hufnagel is currently president of the Merrell, Chaco, Hush Puppies and CAT Footwear brands within the company’s portfolio, reporting directly to the company chairman and CEO and serving on the company’s executive leadership team.

In 2000, Sanders founded Sanders Group LLC (SG), a privately held real estate investment, construction and property management business. Since then, SG has evolved into a diversified portfolio of companies including SG Real Estate, SG Capital Group, and SG Energy Solutions. As managing member of SG, Sanders oversees all companies within the portfolio and is responsible for the fiscal operation of each entity.

Wheeler earned a Bachelor of Arts degree in education from the University of Illinois in 1981. He has been the president of the Greater Gratiot Development, Inc. (GGDI) group in Ithaca since 2016. He was unanimously elected to the position, replacing Don Schurr.

Burns is a fellow of the American College of Epidemiology. She works as president of Burns Epidemiology Consulting.